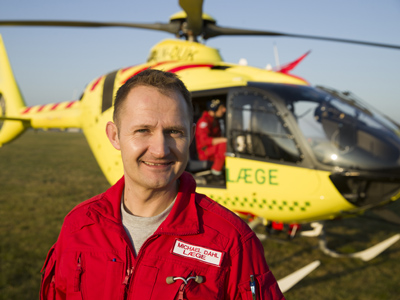 The regions’ new, fourth emergency medical helicopter became operational as scheduled on 2 January at 12:00. During the first week, it has flown to 17 patients. Most of the flights have been to patients in the North Denmark Region, including several flights to the island of Læsø.

The regions’ new emergency medical helicopter, which is based temporarily at Aalborg Airport, flew to five patients already in the first 24 hours. Prehospital emergency physician Michael Dahl, who was the physician on call, experienced that the helicopter was sent on relevant assignments.

First 24 hours with the new helicopter

“We were called out to patients who needed medical assistance and where we could arrive as the first physician, or callouts where there was a need for fast transport to specialised medical care at the hospital. I’m sure that we make a difference for patients and that we’re a good supplement to the other emergency care assistance, but it’s also important to stress that road ambulances are the backbone of the emergency medical service,” says Michael Dahl. He adds that they had no time to twiddle their thumbs while they waited to become operational:

“Getting the new emergency medical helicopter up and running has been an incredibly exciting process, and we were busy with the final preparations right up to the start. But everything fell into place and at precisely noon on Wednesday, 2 January, we reported ready to fly. We had the first urgent callout to a patient at around 15:00.”

DKK 45 million has been allocated to establish and operate the new emergency medical helicopter, which is to contribute to providing better cover of Vendsyssel, including Skagen and Læsø, and relieve the workload of the three existing emergency medical helicopters. It has taken a targeted effort to get a brand-new helicopter, employees and base ready for operation from the start of 2019, and Troels Martin Hansen, who is Medical Director of Danish Air Ambulance, is now looking forward to monitoring the activity.

“We’re very pleased that the helicopter is up and running according to schedule. We will now monitor the development closely over the next few months, including assessing how the new helicopter interacts with the other three emergency medical helicopters,” says Troels Martin Hansen, who is monitoring the activity of the helicopters together with the Steering Committee for the helicopters.

Danish Air Ambulance is operated jointly by the regions, and the operations are funded by the Danish State. The new helicopter has been given a temporary base at Aalborg Airport, until a new base has been established at Saltum, in the northern part of the Municipality of Jammerbugt.