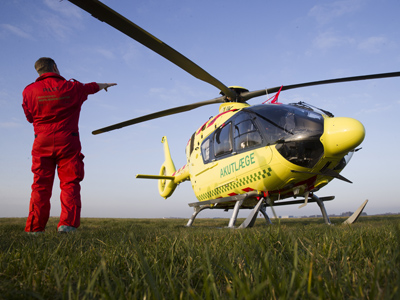 Denmark’s fourth emergency medical helicopter will begin carrying patients at noon on 2 January 2019. This was marked by a visit by selected healthcare sector politicians, who were invited on board the helicopter. The visit took place on 17 December 2018 on a temporary base established at Aalborg Airport until the permanent base is ready at Saltum in Jammerbugten. 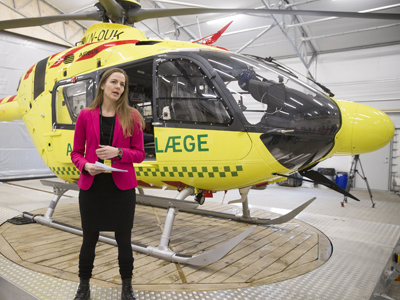 Deputy Chairman of Danish Regions, Ulla Astman, welcomed the visitors. This was followed by speeches, including from the Minister for Health, Ellen Trane Nørby, whose speech included the following comments:

“The location of the new helicopter in the northern part of Denmark means that we can reduce the response time by approximately 20 minutes for a citizen living in Skagen or on Læsø. It’s about ensuring safety and quick help for all citizens in Denmark.”

The guests were then given the opportunity to take a closer look at the helicopter and base facilities, and several health sector politicians were taken for a short spin in the helicopter. 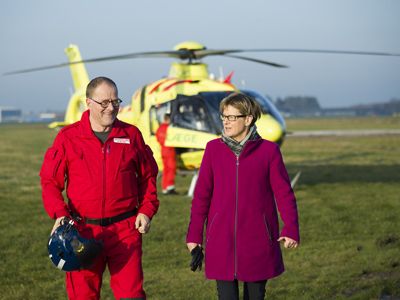 “Today is a really good day for the North Denmark Region. The new helicopter will provide much better coverage of Vendsyssel, Skagen and Læsø than we’ve had before. I’m extremely pleased with this,” said Ulla Astman, and added:

“At the same time, it’s important for me to stress that this helicopter is not only a Northern Jutland helicopter.” Since 2014, all five regions have operated a joint service with three helicopters which fly to critically ill patients throughout Denmark. The new helicopter will be an integral part of this service and the public health service in the five regions.

“It will not stick to the regional boundaries, but will fly to locations where there’s a healthcare need for the service.”

Facts about Danish Air Ambulance and the fourth helicopter