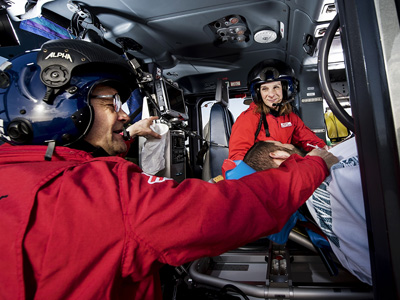 A new survey of satisfaction among patients who receive emergency medical helicopter care shows that they are highly satisfied and feel safe in the helicopter crew’s hands.

"A healthy man in the prime of his life suddenly becomes faint and then lifeless. He has had a cardiac arrest. His wife and son immediately call 1-1-2 and start giving cardiac massage. When the ambulance arrives soon after the call, the man is shocked with the cardiac defibrillator. His heart starts beating, but his condition remains critical. In the meantime, the helicopter has landed near the man’s home and the physician decides to put him in a medically induced coma. He is flown to the Department of Cardiology at Odense University Hospital where he receives a thorough examination and treatment. Six weeks later, he is back at work on a full-time basis."

This patient story has been ‘borrowed’ from the Helicopter Emergency Medical Service’s Annual Report 2018, which has just been published. It is an example of a course of action in which the patient receives good assistance on site from his family, ambulance paramedics and the helicopter emergency physician, which, supplemented with fast helicopter transport to the hospital, gives him the best possible conditions for surviving without permanent impairment. The story presents part of the explanation for the very high level of satisfaction shown in a new patient satisfaction survey for the helicopter emergency medical service.

In a questionnaire survey with 642 patients who have been transported by emergency medical helicopter, as many as 100% of the patients state that their overall impression is positive. Of these, 93% answer ‘very good’ and 7% ‘good’. The patient satisfaction survey was conducted by the research and consultancy firm DEFACTUM in the Central Denmark Region. 30 patients were interviewed as part of the survey, and the patients are generally very grateful, with many of them wanting to thank and praise the helicopter crew’s work.
Chairman of Danish Regions, Stephanie Lose (the Liberal Party of Denmark), is pleased with the high level of satisfaction.
“The helicopters contribute to ensuring that people in sparsely populated areas also receive fast and competent help. It's great that patients are so satisfied,” says Stephanie Lose, and continues:
“It’s perhaps not so surprising that patients greatly appreciate the highly specialised assistance to which the emergency medical helicopters contribute. But the patients also say that they feel that they are shown respect and care. This is really a pat on the back of the employees, as these are values that we would all like to be known for.”

Better communication with patients and relatives
The results from the new survey are generally in line with the latest survey from 2015, when the service had only been in operation for a year. However, there has been a minor, but positive, development in a few areas. This applies to the question of whether the helicopter emergency physician uses a language that the patient can understand, and whether the patient is informed about what will happen during the flight.
It is hardly a coincidence that communication with patients has improved, explains Troels Martin Hansen, who is Medical Director of the Helicopter Emergency Medical Service.
“After the latest survey, we decided to focus on how we can become even better at preparing the patient for what will happen during the flight and how the helicopter emergency physician and the other crew members communicate optimally with the patient and relatives in these critical situations,” says Troels Martin Hansen, who is pleased that the efforts have borne fruit.

About the helicopter emergency medical service

Annual Report 2018
Patients’ experience of the helicopter emergency medical service, published in May 2019